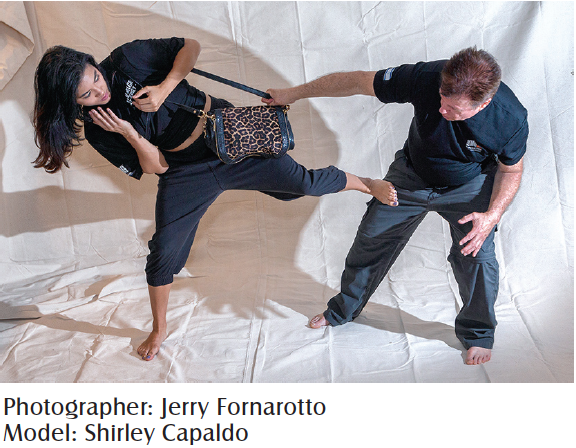 In the previous article, we talked about recognition on attacks. As you read on, in this article we will discuss more about dangerous and technical risk assessment. We will elaborate on points mainly pertaining to women being attacked, as well as the type of particular threats aimed towards them.

Here are a few of the following;

1. Verbal threats and sexual harassment: In this situation, it does not have to be an actual physical threat such as “I’m going to beat you up”. The main intent, is to bring a woman into a victim’s frame of mind to dominate her physically and emotionally.

2. Threats to strike: This is not actually hitting, but the male attacker will use his size and physical strength to intimidate a woman by using threatening gestures and facial expressions. The intent is to use fear to bring the woman into a submission.

3. Grabbing or pulling: This can be aimed at a woman’s neck by choking, bear hugs, hair pulls, arm grabs, or pulling on a woman’s clothing. It may leave the woman vulnerable to be pulled into a remote area and can be escalated into dangerous and deadly attacks. Humiliation can be caused by pulling a woman’s hair, leading her to react into a state of panic.

4. Slapping or striking: Attacks by using the male’s longer reach and muscular strength can be used to stun or immobilize a woman.

5. Knife threat These attacks are used with a sharp object, for example, a knife. The attacker’s intention is to frighten or injure not only woman but any victim in general.

6. Sexual assault Forceful attacks aimed at a woman’s body part, this includes groping or grabbing. It is for humiliation which includes hurting a woman. If the woman is unable to defend herself, these attacks may lead to statutory offenses or worse.

Technique One; Escaping mouth block, grab from behind.

Step 1 of 4; Two hands pulling down on attacker’s wrist with slight bend in the knees.

Step 2 of 4; Right shoulder raises, left foot steps through and behind the attacker. 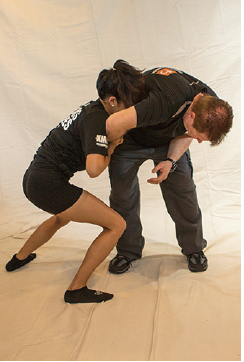 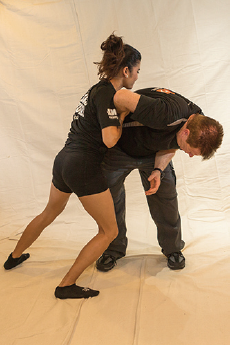 Step 4 of 4; Drives knees in the groin of the attacker. 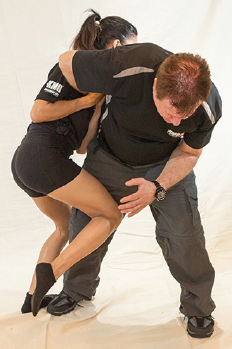 Step 1 of 2; Right foot steps back to find attackers eyes. 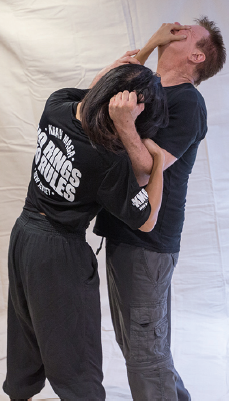 Step 2 of 2; Defender pushes head back digging thumbs into eyes. Follow-ups can be varied from hammer blows to the nose or knees to the groin. 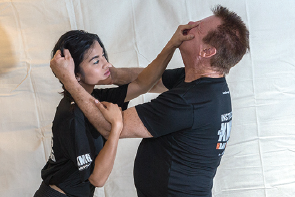 Technique Three; Hair pull from the front as seen.

Step 1 of 2; attacker grabs woman’s hair by the side of the head. Defender locks arm by placing wrist in the crease of the elbow. 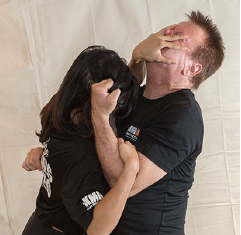 Step 2 of 2; Other hand puts palm on chin and sticks fingers into attacker’s eyes. Appropriate follow-up would be knees to the groin.

Step 1 of 2; Attacker grabs handle of defender’s purse. Defender bends down and stomps knee or hip area with a side kick. 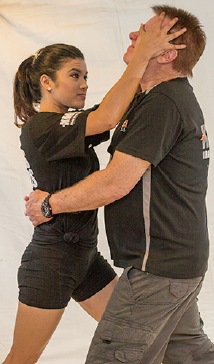 Step 2 of 2; Defender wraps their arms around the bag for security and delivers constant aggressive kicks the knee or hip. If defendant’s life is in danger give up the hand bag. 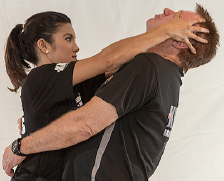